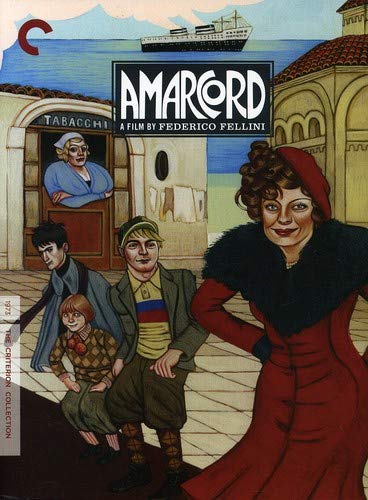 A young man views life in a 1930s Italian village.

From moment to moment and shot by shot, Amarcord delivers more sheer pleasure than any other Federico Fellini movie. That's not to say it's his greatest film, or that anything in it rivals the emotional, lyrical, or metaphysical wallop of the finest passages in Nights of Cabiria, 8 1/2, La Strada, or even La Dolce Vita, the big early-'60s crossover hit that made the director king of the international film world. But "i"Amarcord was the last clear triumph of Fellini's career, his prodigious gifts for phantasmagoria, amazing fluidity, and gregarious choreography all feeding an emotional core that caught at audiences' heartstrings and carried them away.

The title is supposed to mean "I remember," and the film is ostensibly a memory-dream-diary of life in the director's seaside hometown of Rimini during one year in the 1930s. But Fellini was an irrepressible showman who loved pulling the audience's collective chain, and Amarcord is no more straightforward as a recollection of his real adolescence than "amarcord" is a real word--Fellini made it up as a bit of pretend vernacular. So the strolling town historian who pops up occasionally to supply antiquarian footnotes directly to the camera more often than not gets pelted with snowballs from offscreen. Just as Nino Rota's (wonderful) music score recycles melodies from his scores for earlier Fellini masterworks, Fellini's movie is full of lyric ecstasies--spontaneous parades, comic ceremonies, eye-popping surrealist moments--that exist principally because that is what a Fellini movie is supposed to be like. There's no dominant story line, no individual character or player to be identified as the center of the film's swirling movement. Yet we do get to "know," and begin to cherish, literally dozens of goofy, eccentric, funny/sad creatures who have their distinct places in the continuum of Fellini's made-up town and reimagined Italy of a bygone era.

The era was, of course, that of Facsism. Fellini's take on Fascism here is anything but portentous; the giddy nationalism given voice occasionally by delirious crowds of townsfolk is no more sinister than the same crowd might have been in cheering on the local football team. In the movie's most famous set-piece, dozens of locals put out to sea in small boats to witness the passage of a fabulous ocean liner, the Rex, "the greatest construction of the regime." Waiting, they sleep--till suddenly the luminous (and entirely unreal) vision is towering above them, threatening to swamp them all. The moment is both ecstatic and terrifying. It's not the only one.

"p" One last memory: In 1975 "i"Amarcord received the Oscar for best foreign-language film of 1974. Since the film went into general U.S. release in '75, it was eligible for the Motion Picture Academy to turn around and nominate Fellini again, in '76, for best director and best original screenplay of 1975. He didn't win any further awards, but his repeat appearance in that year's Oscar derby occasioned an exquisite cultural moment: the young Steven Spielberg, realizing that he had not been cited for his direction of Jaws, gasping, "They gave my nomination to Fellini?!" --Richard T. Jameson

Many rereleases and "special editions" of films already available on DVD turn out to be more than a little superfluous. Not so with Amarcord, which was the fourth title Criterion brought out in the 1990s. Advances in telecine technology have made possible a markedly richer, sharper presentation--explained and permissibly bragged about in one of the extras on disc 2--that alone justifies Criterion's 2006 release. Now Giuseppe Rotunno's color cinematography is richer, more breathtakingly gorgeous than any 35mm print '70s audiences could have seen after it had clattered through the projector gate a few times. But there's also a warm and illuminating new 45-minute documentary, Fellini's Homecoming, that should deepen anyone's understanding of and affection for the movie and its creator.

Several lifelong friends of Fellini's--including "Titta," the real-life counterpart of one of the teenage chums in the film--reminisce about the youth and hometown they shared, and about Fellini himself. There's nothing tearily nostalgic or idolatrous in their tone or what they have to say; he and they maintained their friendship throughout his life, and apparently never stopped razzing one another. They portray the mutual estrangement of the town of Rimini and its most celebrated son: how people sniffed that during his rare visits he was never seen on the main street--and how, for his part, Fellini himself avoided the main street precisely because he didn't want to seem to be strutting his celebrity. There's also testimony from Amarcord's great cameraman Giuseppe Rotunno about Fellini's re-creation of Rimini entirely in the CinecittÃ  studio, the director's fear that even this fabrication would look "too real," and Rotunno's own insight that "deep down he was afraid of being reabsorbed by the past."

Elsewhere, in an audio-only feature accompanied by stills, film critic Gideon Bachmann, a friend (and friendly gadfly) of three decades, interviews Fellini about his working methods and presses him as to whether there is one particular "phantom" the director pursued through all his films ("What is this madman saying?" Fellini protests, to a probably imaginary bystander). Fellini refused to look at dailies because he didn't want to find out that the film he was making wasn't the one he carried in his head. He also prized "obstacles," including uncooperative producers, because they forced him to be creative: "I am very afraid of ideal conditions." Bachmann also interviews Fellini family members.

The audio commentary on the film itself, by two scholars who have written books on Fellini, is far less satisfying. Their insights about sexuality, misogyny, the nature of fascism and so forth are undoubtedly valid, but most of it comes across as academic bloviating--something Fellini would have parodied with relish. But scholar Sam Rhodie's essay "Federico of the Spirits," printed in a monograph with Fellini's pre-Amarcord notes "My Rimini," succinctly defines Fellini's aesthetics overall and those of this film in particular. There are also a charming video remembrance by actress Magali Noël, a hasty and entirely happy substitution in the key role of "Gradisca"; a deleted sequence, visually striking but without sound; the usual collection of stills, theatrical trailer, and (not so usual) radio ads for "i"Amarcord; and an optional, English-dubbed soundtrack for the reading-impaired. "i"--Richard T. Jameson